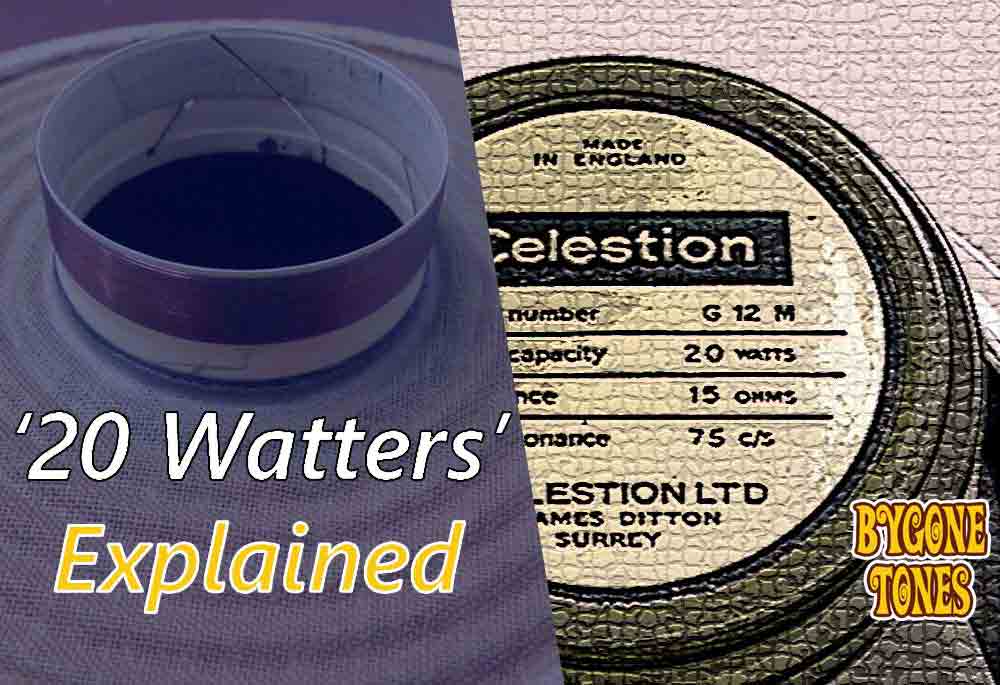 The Celestion greenback 20 watt G12M and 25 watt G12H are some of the most sought after pre-rola speakers. However it is easy to be fooled by the labels on these speakers, everything is not always as it seems.

Here I’ll give a quick overview of the main differences between the 20 watt and 25 watt G12M (and equivalent G12H), and how to identify the imposters with the deceiving labels on them!


In late 1967 Celestion upgraded the voice coils across all speaker models to allow for roughly 5 watts more power handling. This gave us the familiar 25w G12M and 30w G12H – and we can assume the alnico speakers also increased from 15w to 20w (or 17w to 22w according to some sources).

The “5w less” speakers had a white coloured voice coil former. These speakers are known to struggle with their rated power handling.

The “5w more” speakers had a brown coloured voice coil former, made from a more heat resistant material.

There are subtle sonic differences between the two types of voice coil. The white coil speakers are the most sought after by collectors and discerning tone hunters!

The transition from the white former to the brown former did not happen all at once. It was a gradual transition over several months.

Even more confusing, the labels did not change “with” the voice coils. Celestion only altered the labels several months later – around April 1968. So there was a long transition period when the speakers had the ‘5w more’ brown voice coil, but they still carried the older ‘5w less’ labels.

So when buying speakers just be careful of this. Dealers will always ask a premium if they have the ‘5w less’ label on them (20w G12M or 25w G12H). However, if they have the brown voice coil former they are really no different to the later pre-rola’s except for the slightly different cork gasket.

To be 100% sure of a white voice coil, the speaker ideally needs to have been made before June 1967. Early greenbacks from that period are particularly rare due to lower production numbers. That is one of the reasons why they are more valuable to collectors.

On G12H speakers look for doping on the reverse side of the cone. This is usually a good indication the speaker has the white voice coil former. A G12H without the reverse side doping is most likely a brown former speaker – a 30 watter.

Sonic differences aside, there are no visual clues on the G12M speakers to determine what type of voice coil it has, without dismantling the speaker. This is definitely not advisable unless the speaker needs repairing. Some people have suggested using a strong flashlight to look through the dust cap. I have not tried this myself yet, but apparently it works so long as the dust cap is not too clogged with dirt.

Some new information has also come to light regarding the wiring of the voice coils and polarity of the magnets. Thanks to research undertaken by Michele Bisignano and Maurizio Montani in Italy.

You can check this using a small magnet on the back of the speaker.

So far I have only tried this on a handful of speakers myself and it does seem to check out. However, I would like to try it on a good few more speakers from the transitional period (late 67) to confirm it fully.

The speakers with the white coil formers are the best sounding greenbacks Celestion have ever made in my opinion. They sound clearer, have better note definition, feel more responsive, and have that ‘woody’ tone in spades.

If you are a ‘plug straight in’ kind of guy, then you will probably love the white former period greenbacks too. Just be careful with them. The key to getting the best tone from them is to give them plenty of power. It can be a fine line between ‘optimum tone’ and blowing the speaker!

The brown coil speakers will give a warmer and thicker sound at lower volume levels and do not need to be pushed as hard to sound at their best. However, they lose some of the magic of the earlier speakers in my opinion. If you use a lot of distortion or other effects then you will probably prefer these later speakers.

Ultimately, the type of greenback you prefer will come down to personal taste, your playing style, and the other elements of your rig. Use your ears and keep experimenting!