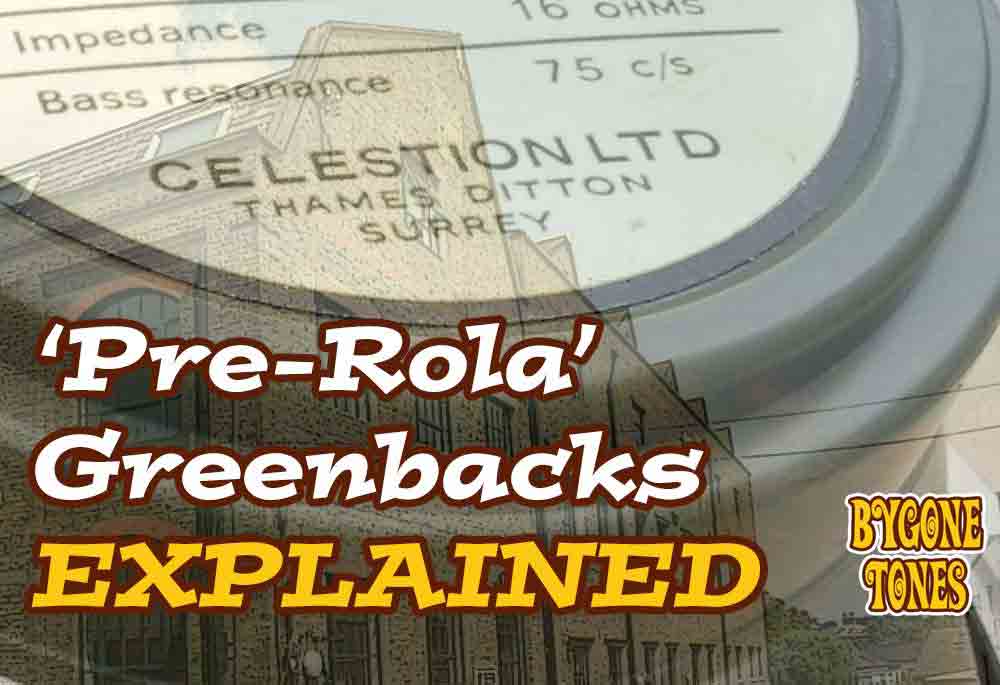 Pre-rola greenbacks are considered to be some of the best sounding guitar speakers ever made. They are highly collectable due to their association with 1960’s amplifiers, notably Marshall, and the guitar legends that used them back in the day.

However, there is a lot of confusion about what the term pre-rola actually means, and how we define a speaker as being a pre-rola.

Pre-rola is not a reference to the history of the company – a time when Celestion were “not Rola”.

‘Rola Celestion Ltd’ was formed way back in 1947, as a result of ‘British Rola Ltd’ merging with ‘Celestion Ltd’. This was way before any greenback speakers or Celestion branded guitar speakers were ever made.

So what is a pre-Rola?

A pre-rola speaker is any Celestion greenback made between roughly Jan 1966 and April 1971, with the ‘Celestion Ltd, Thames Ditton Surrey’ text at the bottom of the label.

Guitarists call them ‘pre-rola’ because they came before the labels with the ‘Rola Ipswich’ text on them.

The Ipswich Suffolk address is important to note on the 1970’s Rola labels, for reasons I will get to a bit further down the page.

The Rola Ipswich labels first appeared in April 1971, so any speakers made after April 1971 are generally not classed as pre-rola.

Both the Rola Ipswich and pre-rola labels can be found on speakers from April 71 with the DD date code on the frame leg. This was the transitional month for the labels.

Celestion did not change the labels across all speaker models at the same time, it was a gradual transition. Speaker models produced in lower numbers, such as the 8 Ohm models, often transitioned a bit later, some as late as 1975.

Most collectors will not class a speaker made after April 71 as being a true pre-rola even if it has the pre-rola label on it.

According to Celestion’s history, they were producing speakers at both the Thames Ditton factory and the Ipswich factory from late 1968 to late 1975, so if you think about it, there was no need to stop using the Thames Ditton labels at that time. Maybe the 8 ohm speakers were still being made at Thames Ditton? Who knows.

Before the pre-rola labels, Celestion were using gold and red foil labels. Notice the Thames Ditton address, rather than the Ipswich Suffolk address:

Speakers with these gold and red labels are very rare to find these days. They were only used for a short period circa 1964 to early 1966, and found on the first ever greenbacks – before they were green. Very collectable!

Why do pre-rolas sound better than other greenbacks?

During the whole pre-rola period Celestion were using cones made by a company called ‘Pulsonic’. These are generally considered to be the best sounding guitar speaker cones ever made.

Legend has it that due to a fire at the factory in late 73 those amazing sounding cones were never made again. Nobody has replicated them successfully since, though several boutique brands have attempted it, including Celestion themselves.

The good news is that you do not have to pay pre-rola collector prices to get the Pulsonic sound. Pulsonic cones were actually used by Celestion from mid 1962 to late 1973 – well into Rola Ipswich label period. You might also find the ‘large rib’ pulsonic cones on some creamback speakers made from mid 1974 to mid 1975. These later speakers are less collectable and usually a little cheaper to buy, but will sound just as good.

Where to hear them

I recommend listening to any live recordings made between 1966 and 1971 by Jimi Hendrix, Cream (Eric Clapton), Deep Purple (Ritchie Blackmore), Free (Paul Kossoff), and Led Zeppelin (Jimmy Page). This should give you a good grounding in the Celestion pre-rola sound.

Youtube has lots of great footage. Free at the Isle Of Wight in 1970 is a good starting point – Kossoff’s tone was something else.

Buying vintage pre-rola greenbacks can be difficult. Their rarity is part of their appeal to collectors, and when you do finally find a good set without any faults, they can be very expensive to buy.

There are several speaker brands that now manufacture their own pre-rola ‘clones’. All attempting to recreate the old 60’s British sound. The brands most worthy of trying out are Austin Speaker Works (ASW), Tayden, Eminence, Warehouse Guitar Speakers (WGS), and the Weber Legacy series.

Let’s not forget that Celestion themselves are still making great speakers. As I always say, if you want the Celestion sound, stick with Celestion!

For a good tonal comparison with some modern day greenbacks I can highly recommend this video made by George Metropoulos. Although there are many similar videos on youtube these days I still think this recording captures their sound the most accurately and professionally:

In my opinion the reissues and clones will get you about 80% there, but the genuine vintage speakers still sound superior. The main problem modern speaker manufacturers face is that the old materials, tools and glues are no longer available, and it is those little details combined that created the magic in those old cones.