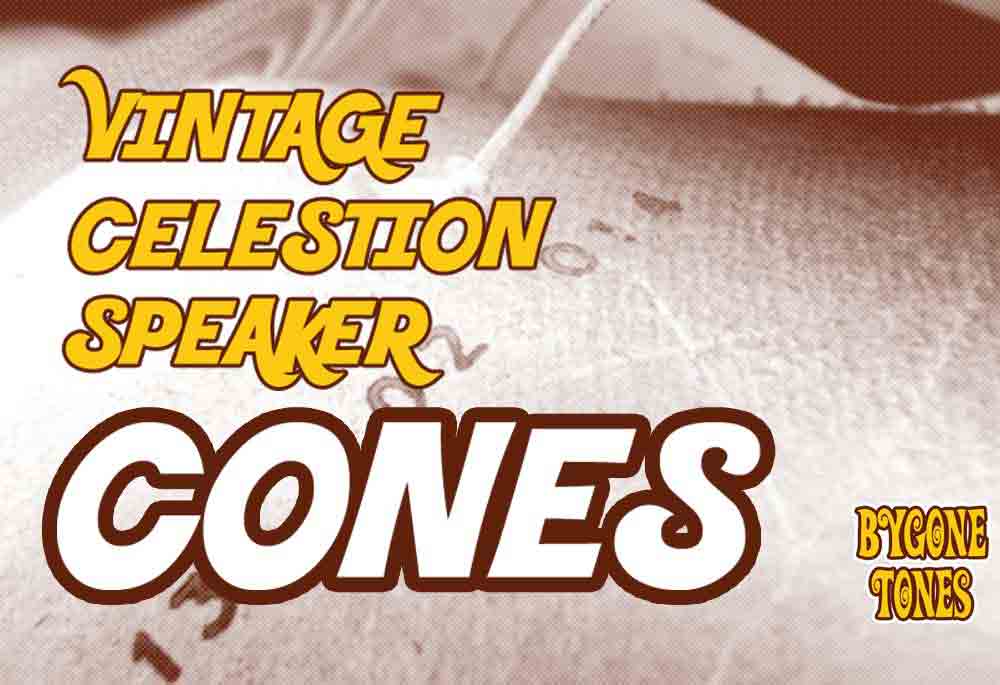 Tone Is In The Cone

Over the years Celestion have used various cones from different suppliers, all slightly different in tone.

Celestion have never really given any information out about their suppliers. Therefore a lot of the details about them that you might read elsewhere, often just turn out to be nonsense that has been repeated and passed down the grapevine over the years.

The information I have written on this page is based on my own experience dealing in vintage speakers. It may conflict with information you have picked up elsewhere, but is accurate to the best of my knowledge.

If your speaker has a ‘1777’ or ‘444’ stamp, it does not automatically mean it is a Kurt Mueller cone. These are actually Celestion part numbers and can be found on several different cone types.

If your speaker has a hand written code, or is completely unstamped, this does not automatically mean it has been reconed. If it looks original and sounds original – it is probably original.

The ‘RIC’ cones from the mid 1970’s are particularly common to find with either a yellow chalk marking, or no marking at all.

Old recones are usually fairly easy to spot because they will look a lot different to the original Celestion cones. Watch out for odd looking cones, over-sized or incorrect dust caps, unusual looking lead wire glue (the two black marks near the dust cap), and spider supports that overlap the frame rim or just look too new.

When reconing a speaker, the original gasket surrounds would often be re-used, especially if they have a date stamp on them. So an original gasket does not automatically mean the cone is original too. The white manilla gaskets are particularly easy to remove and re-fit.

Most speaker repair places will leave a sticker on the frame of the speaker somewhere and that is often the first visual clue.

A common recone to find on older speakers is the Waldom recone kit, which usually has the cone stamp WF***.

Recones are not the end of the world and can still sound good if they are not coil rubbing. However, any collector value goes right out the window once the original cone is gone. So never pay top dollar prices for a reconed vintage speaker.

Celestion would sometimes print a new date stamp when reconing a speaker. This is usually accompanied by an additional ‘RW’ stamp, and can often be found on the old alnico’s from the 60’s. Obviously if it is a very old recone from when Celestion were still using pulsonic cones then this should not affect value too much and will still be a desirable speaker to most people.

The pulsonic cones first appear around mid 1962, most notably on the T530 “vox blue“. They are easily the most sought after cones by guitarists because they have a superior quality to their tone that cannot be found in any other speaker cone. Their slightly softer and more ‘fluid’ sound is particularly popular with blues and classic rock guitarists.

Pulsonic cones are highly collectable due to their association with the legendary guitar players of the period such as Jimi Hendrix and The Beatles, and their use in the old 60’s Marshall and Vox amplifiers.

Legend has it that a fire at the Pulsonic factory in late 73 destroyed the magic formula for making those sweet sounding cones. Nobody has successfully managed to replicate them in my opinion, though several boutique brands have tried, as well as Celestion themselves with their Heritage greenback range.

There are various cone stamps to be found on pulsonic cones, largely depending on when they were made. Some stamps are less familiar than others, including the ‘1777’ stamp which people often incorrectly assume must be a Kurt Mueller.

A while ago I found an unusual T652 speaker with both the H1777 and 003 stamp on the cone. I decided to include it here as my evidence for the non-believers. Same cone, two different stamps:

Pulsonic cone stamps through the years

These cones are basically the same as the earlier pulsonic cones but have noticeably larger ‘ribs’, or ‘corrugators’ to give them their proper name. They can usually be found on creamback speakers made between mid 1974 to mid 1975.

If the fire in 73 story is true, these were possibly made from the remaining stock of pulp.

Their sound is very similar to the previously mentioned pulsonics, but you might notice they are marginally brighter at lower volume levels. The beauty of these cones is that because they were produced a little more recently they tend to turn up in better condition than the older pre-rola speakers and are usually a lot cheaper to buy!

Most people dismiss these cones as Kurt Muellers because of the cone stamps. A classic example of how a lot of guitarists use their eyes when evaluating gear, rather than their ears!

Most commonly seen on greyback and creamback speakers from around August 1973 to mid 1975, and on most ‘G12’ alnico speakers made before mid 1962. These cones were probably made in house at Celestion’s Thames Ditton factory in my opinion.

They are usually fairly easy to identify by their blue/grey appearance, and they do not usually have a ‘shadow’ around the dustcap like a pulsonic or mueller cone.

Their sound is quite distinctive, and they are generally under-rated by most people. Often described as ‘dark’ sounding which may be unfair. They are very nice sounding cones in my opinion, with a smooth sound that can tame a harsh sounding amplifier, and they can be superb for lead work, although do lack some of the sparkle found in other cones and can be a bit ‘boxy’ for rhythm playing. Try mixing with a pulsonic for the best of both worlds.

Other stamp variants found on non-greenback models include ‘NIB’, ‘ROB’ and ‘JIL’, which I am confident are cones from the same factory but made to different specifications. The NIB cone was standard on the 10″ speaker model 7442 used by Marshall all the way through from late 1960’s to mid 1970’s, and is a very highly regarded speaker amongst Marshall collectors.

It is common to find the RIC cones without any stamps or other markings, particularly around early 1974. So be careful not to dismiss them as recones. I have definitely owned more without stamps than with.

These are very rare cones and were only used for a short period. They can usually be found on creamback speakers made between May and July 1974 – with date stamps EG, FG, or GG.

Very little is known about them, but I can tell you they are some of the nicest cones you can find and are well worth looking out for. Please do not dismiss them as recones. The tone is slightly less mid focused than the pulsonics, so a bit flatter sounding, but still a very nice smooth & fluid tone, not harsh or gritty.

Their tone is a bit more aggressive than the pulsonic cones and may be more suited to your style if you play heavy rock. They are a good sonic match to the master volume Marshall amps of the period.

They tend to be pale grey in appearance wth a slight shadow around the dust cap. Although colouration does seem to vary and can appear darker or more blue in some cases – this can happen if a different dye has been used for the paper pulp.

The first Mueller cones from early 1975 are usually unstamped, or may only have a small single digit number written on them in marker or chalk, with a brown colouration to the doping.

Through mid 1975 some Muellers have their codes handwritten in black marker.

The white 1777 and 444 stamps only seem to appear on Mueller cones towards the end of 1975. Earlier 1777 stamps are unlikely to be Muellers, and are probably Pulsonic or large rib Pulsonic.

Some late 70’s and 80’s cones are stamped in black ink, and can often be difficult to see.

These cones are a variation of Kurt Mueller in my opinion, but I could be wrong. They can be found sporadically on blackback speakers and G12-65’s made in the late 1970’s. They basically sound near enough the same as the previously mentioned Kurt Mueller cones. However at low volume they are a little bit clearer and brighter sounding to my ears, which I do prefer.

​The most notable difference is the larger ribs on the cone and the lack of any cone stamp. The back of the cones are usually a lot darker in appearance.