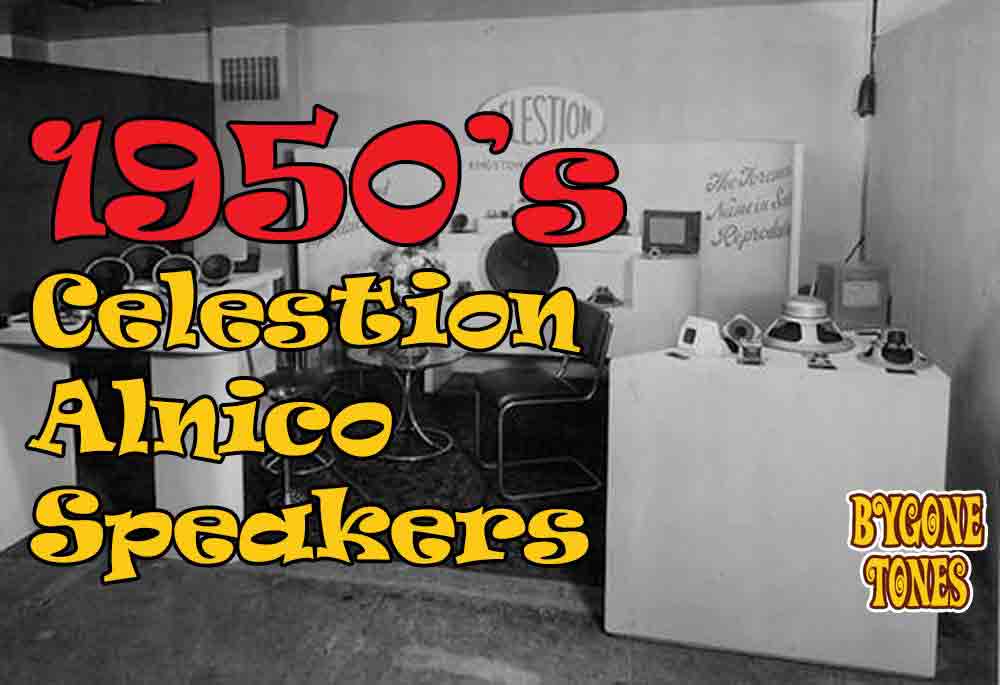 Very little seems to be known about the very early Celestion and Rola G12 speakers from the 1940’s and 1950’s such as the Rola / Celestion B025, the P74 and P44. Examples do turn up online from time to time, and I’ll share some of the information and examples that I have found here.

Every speaker is a piece of the jigsaw, so if you have any additional info or photos then please email me, I would be really interested to learn more about them.

We already know from existing date code charts that the year code for 1956 is the letter A. I think it is safe to assume that Celestion were using the same A to M cycle before 1956. So working right back to the letter A would give us the table shown below.

The date codes were printed on the outer rim of the metal chassis, at least until Nov 1951 (LH date code), then on the front gasket from at least April 1952 onwards (DJ date code). I haven’t seen enough examples to narrow it down any further.

This green leaflet is dated June 1956, of interest to most guitar players will be the G12 model. 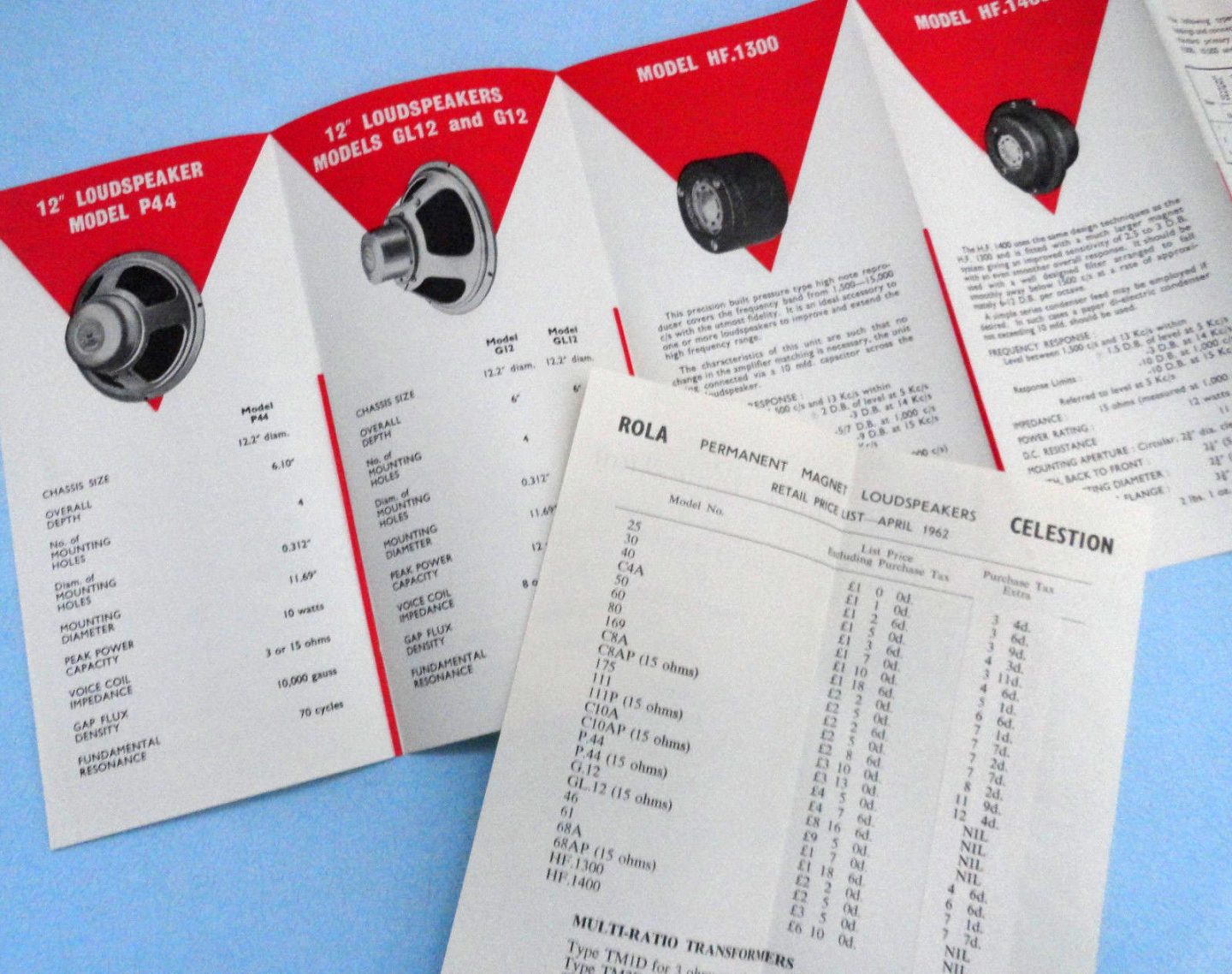 Celestion would have been making variants of the G12 mainly for Vox at this time. No greenbacks or Marshall amplifiers around yet. 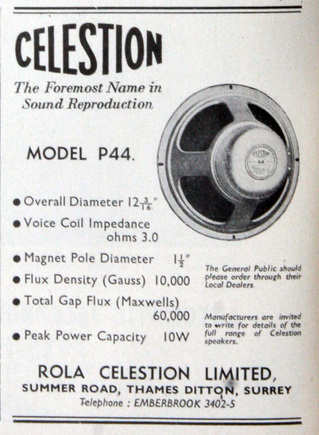 The Celestion 44 or P44 is a 10w alnico speaker with 1.5″ voice coil. Although these speakers are similar in appearance to guitar speakers I would not recommend using them for guitar, they were built for use in radiograms and other audio equipment.

Most have Celestion labels, but there are a few with Rola labels.

The Celestion brochure for the P44 describes it as “a lightweight, relatively inexpensive speaker possessing the full bodied bass response normally associated with more costly 12″ speakers, together with a particularly clean and smooth upper register. This model can advantageously replace a 10″ speaker in most radiogram applications”

The 27LH date stamp on this P44 translates as 27th Nov 1951. It was sold on UK ebay with another speaker dated 19MF, which would take production of these speakers back to December 1949.

The cone stamp is usually ‘ROB’ (part of the R probably missing here), which was probably a cone made in house at the Thames Ditton factory – similar to the ‘RIC’ stamped cones. The date stamp and circular inspection stamp are printed on the rim of the metal chassis.

Here we have a later P44 in excellent condition. The ’27DK’ date stamp on this speaker translates as 27th April 1965. Notice the cone is now a pulsonic with 9/830/00 stamp. The date stamp and circular inspection stamp are printed on the front gasket instead of on the metal rim.

‘Under the hood’ we can see the P44 is a very different speaker compared to your average guitar speaker.

Here is a really early G12 speaker model 1478, still carrying the old motto “The Very Soul of Music”. Notice both the model number and date stamp are printed on the outer rim of the chassis. The cone stamp is barely readable.

The Celestion P74, model number 1772. Supposedly a higher powered version of the P44, and probably rated at 12 watts. The ribbed cone and larger magnet make these a better choice for guitar players than the P44. These seem to have the Celestion label as standard rather than the Rola label.

The MG date code printed on the outer rim could be translated as Dec 1950.

No label, model number or cone stamp with this one, but has the black band around the magnet (may or may not be a 1772). The ‘GH’ date code translates as July 1951.

This 1772 speaker turned up on Ebay France, no date code unfortunately but notice it is labelled as a G12 rather than 74 – factory mistake or intentional? Still with the black band around the magnet.

Notice the green 1956 Celestion brochure shown above does not feature the P74 model at all. So it is possible they were discontinued by that point, and I have not seen any with later date codes.

Likely the G12 model referred to in the Celestion brochure, which states these are “12 watts peak power, 13,000 gauss magnet, with 60cs fundamental resonance”. They were designed for audio, so are not strictly speaking guitar speakers, but they were used in some early guitar amplifiers.

Shown below are a few examples that have turned up in recent years, ordered by year. 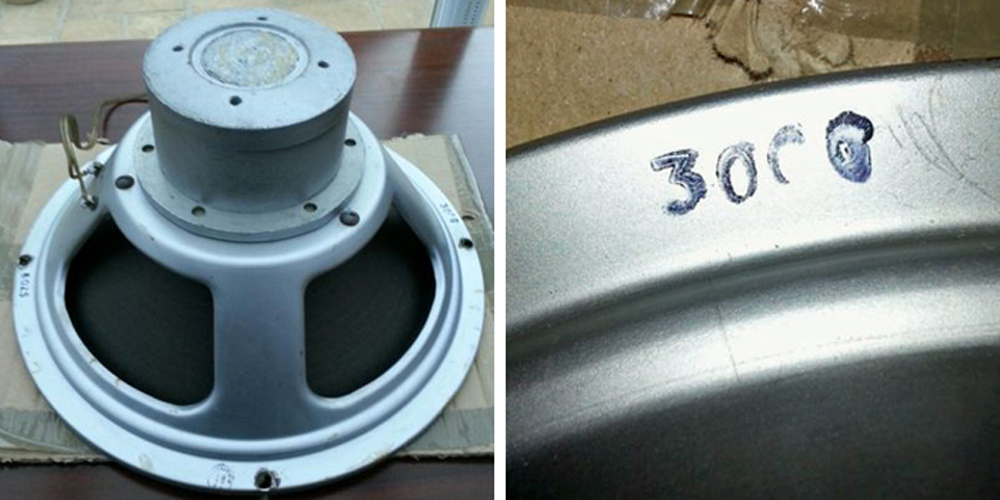 This B025 model speaker turned up on UK ebay a while ago. Notice the model number (B025), date code (30CG), and circular quality control stamp are all stamped on the rim of the metal chassis. The magnet has four small nuts at the top, not the large slot head screws found on later speakers. The 30CG date stamp could translate as 30th March 1950.

A slightly later speaker. The date stamp 26BH could indicate 26th Feb 1951. Notice the Rola label, and the additional C in the cone stamp. ‘RCIC’, instead of ‘RIC’.

The date stamp is still printed on the rim of the metal chassis.

04LL could be translated as 4th November 1954. Date stamp on the front gasket of the speaker, notice the circular quality control stamp is still on the rim of the frame. Rola label.

A very similar speaker to the previous one with Rola label. The date stamp 13GM could be translated as 13th July 1955. This speaker also has a RIC1 cone.

Unfortunately no visible date code on this one, but it was included with a batch of 5 others from 1956, so I believe it to be very close (one shown below). Notice the label is now Celestion B025 instead of Rola B025.

01DD translates as 1st April 1959. Unfortunately no label but assumed to be a Celestion B025.

Here we have a Celestion B025 from 11th April 1962. Both the date stamp and the circular quality control stamp are on the front gasket. Large slot head bolts in the back of the magnet.

A similar Celestion B024 speaker dated Jan 1963. Celestion now using pulsonic cones. The owner of this speaker has since been in touch with me and confirmed it has the H1777 stamp.

A Celestion B025 dated July 1965, also with the pulsonic H1777 stamped cone. The most recent B025 speaker I have seen and possibly one of the last ones to be made.