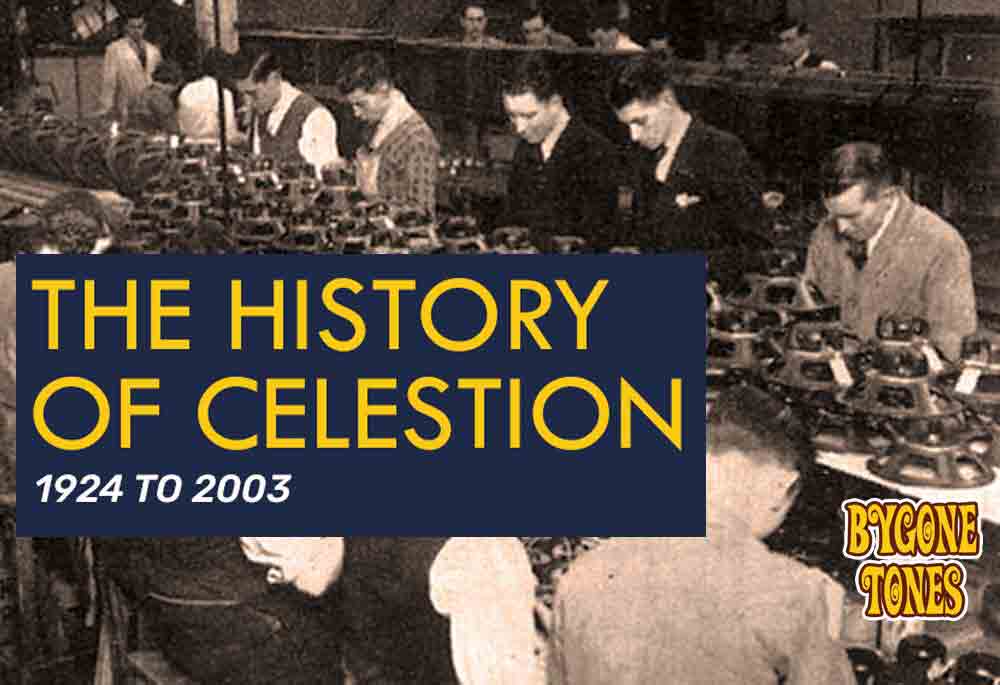 Celestion has been an iconic brand for guitarists since the 1960’s. However their roots go much deeper than this, starting back in the 1920’s with early radio speakers. The following text detailing Celestion History has been taken and adapted from a Celestion website article dated Dec 2003. Illustrated with photos taken from the web and Celestion’s facebook page.

In 1924 Cyril French set up a small business to manufacture loudspeakers, helping Eric Mackintosh improve his invention – one of the earliest cone loudspeakers.

French and two of his brothers, Leonard and Edgar, created ‘The Electrical Manufacturing and Plating Company’ at 29 High Street, Hampton Wick. 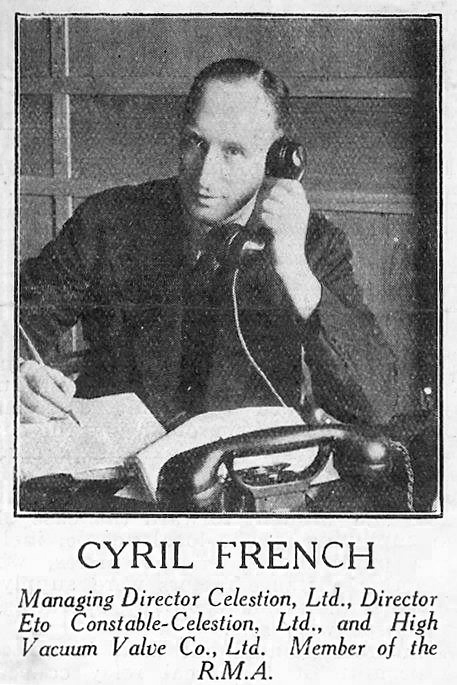 Amidst great excitement, French and Mackintosh perfected the loudspeaker design, and patents were issued for their ‘free-vibrating edge’, and ‘clamped edge’ designs.

The Celestion loud speaker was launched early in 1925 and was favourably reviewed by ‘Popular Wireless’ as “a high-class instrument capable of high-class perfomances”.

In 1927 – The Celestion Radio Co and Celestion Ltd were formed; The company’s motto, and for many years to follow, was “The Very Soul of Music”. 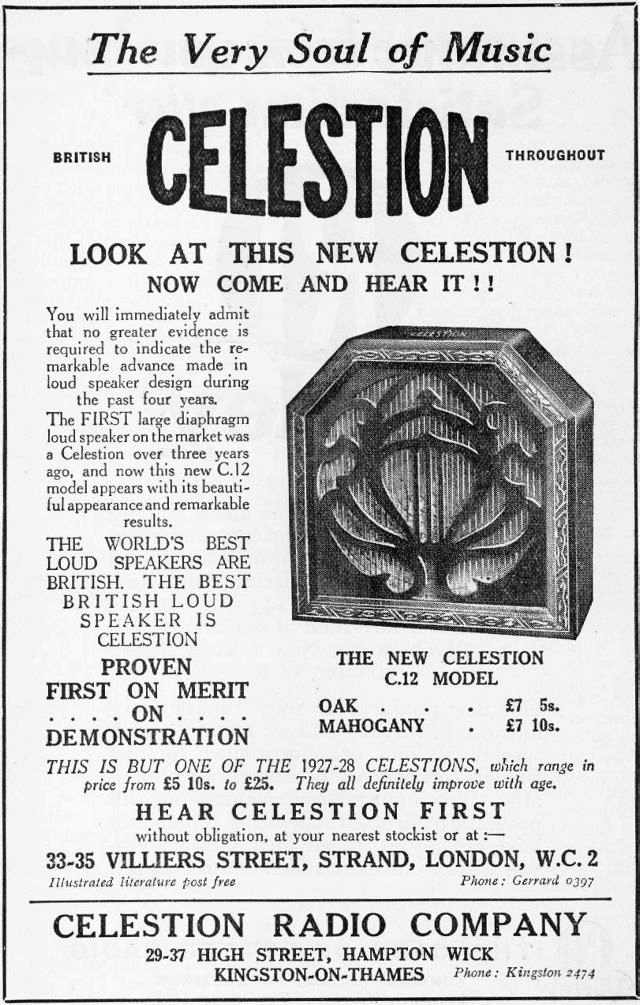 Through the late 1920’s Celestion enjoyed a burgeoning trade, and in 1929 moved to larger scale premises at 145 London Road, Kingston-upon-Thames.

Celestion was moving in both the mechanical and electrical spheres of the home entertainment industry, offering luxurious gramophone models. They even issued a separate catalogue for ships, which included gramophones, band repeater equipment and reproducers.

French and Eric Mackintosh both left Celestion in the early 1930’s. The reason for this is not clear, but there is evidence to suggest that Cyril French was a hard taskmaster. 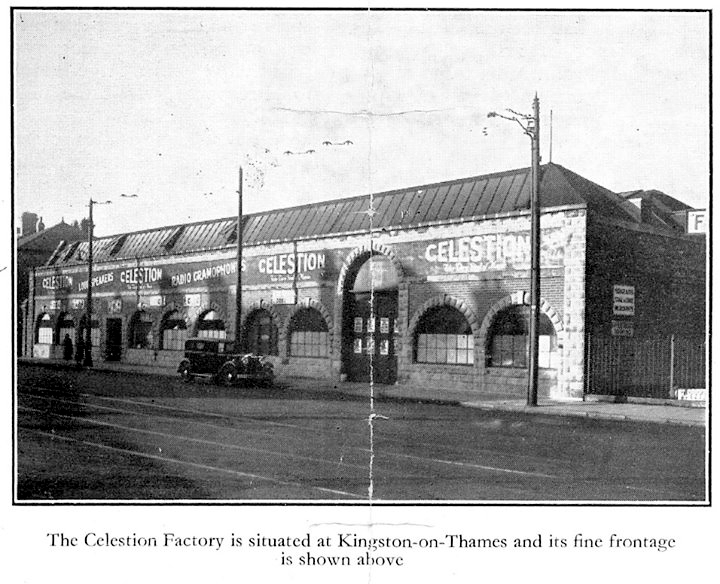 In 1935 the worldwide recession hit Celestion badly, and the first ‘boom’ era came to an abrupt end. Cyril French resigned from the board of Celestion Ltd and returned to the old site at Hampton Wick to operate as sole wholesale and retail distributor of Celestion products in Great Britain

The market for speakers shifted from the large separate units to small speakers fitted inside the radios themselves.

The British Rola Company, an offshoot of the Rola Company of Cleveland, Ohio, USA, had been making very similar products at Minerva Road, Park Royal, London NW10 since 1934.

After the war, the hard winter and fuel crisis of 1947 caused havoc and production was incredibly slow at both companies.

During July 1948, Celestion ceased production at Kingston-upon-Thames, and production machinery and personnel moved to Thames Ditton as a consolidation of the two companies. The company title became Rola Celestion Ltd, and ‘Celestion’ was adopted and registered as the trade mark for the company’s product. 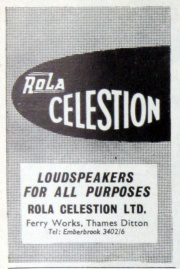 As the market for television grew, so did the need for speakers and the Thames Ditton production lines were fully engaged meeting the manufacturers’ deadlines.

In 1949 another change in fortune came about when Rola Celestion was acquired by Truvox, a company based in Wembley and well known for its Public Address loudspeakers and systems.

The new Company was now owned and chaired by Mr.D.D.Prenn and the Head Office situated at Mount Street, London. Technical Director Arthur Young was resident at Thames Ditton. This brought the Public Address loudspeaker systems into the Celestion range, where they were further developed.

During this time a number of diverse alternate production lines were tried, including a pre-Christmas production of toy ducks! A more logical diversion was that of a moving coil microphone. Loudspeaker production at this time was about 30,000 to 35,000 units per week.

This era gave birth to the stereophonic long playing record and as the taste for high fidelity increased, so did the demand for even better sound and stereo.

The burgeoning market for live, amplified music gave rise to the enormous success of the G12, which eventually achieved fame as the guitar loudspeaker used in the Vox AC30 used by the Beatles and many of their contemporaries.

With their ears continually to the ground and their eyes on the market, the Thames Ditton design and engineering staff produced in 1964 what was to be the first of many notable Celestion hi-fi loudspeaker designs.

Utilising the name of its birthplace, the Ditton 10 was launched at a critical time when it satisfied overnight a demand that hitherto had been frustrated. Offering the best possible audio quality from its bookshelf size, it was highly commended for its bass response. A quality that the pundits had always maintained could only be achieved with a large and heavy enclosure.

The Ditton 15 made its appearance during 1966, and was eagerly sought after by the now stereo conscious public. It became the biggest selling bookshelf loudspeaker of its time.

In 1968, as the demand for Ditton loudspeakers mounted, production became a problem at the Thames Ditton factory and it was decided that a new location at Foxhall Road, Ipswich was required as an expansion of the present site.

New buildings were constructed, existing ones modified and the nucleus of a work force recruited using ex-Thames Ditton supervisory staff to train the new employees. Production began in Ipswich in late December 1968.

First into manufacture at the new Ditton Works, Ipswich, so named to perpetuate the original site, were the 12″ Power loudspeakers of the G12 type. In the early days supply and distribution raised many problems as a vehicle was despatched early each morning from Ipswich to make the 90 mile run through London to Thames Ditton, carrying the previous day’s production. It then loaded and returned by the same route, carrying back essential components for the next day’s production, enabling the supervisor, charge hand and twelve ladies to meet their schedule.

As the weeks passed the interior of the Ipswich works began to house more and more sophisticated production machinery and more staff were engaged to operate the lines. They were now able to relieve the problems at Thames Ditton in the supply of domestic speakers to the manufacturers.

In 1970 Rola Celestion was brought together with a publicly-quoted clothing company and the holding company created was named Celestion Industries plc.

Due to increasing demand for high fidelity stereo cabinet systems, further expansion took place with the acquisition of a modern assembly plant on the Hadleigh Road Trading Estate on the other side of Ipswich.

Ditton Works now concentrated on the manufacture in all aspects of hi-fi component units, Power Range loudspeakers and units in the Public Address sector.

1974 – With the surge of interest in hi-fi from the general public, staffing levels reached a peak in January 1974 with a total of 907 employees at the two sites in Ipswich and at Thames Ditton, some of these working night shifts. Distribution was now wholly carried out from Ipswich by a new fleet of company vehicles. The Thames Ditton factory was gradually run down, eventually closing altogether in 1975. 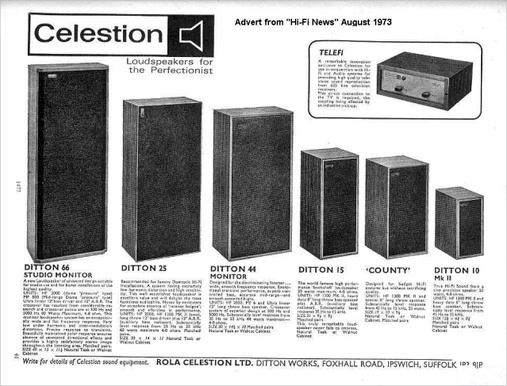 1979 – The increasingly international nature of the company’s business led in 1979 to the adoption of the name Celestion International as a corporate identity for the parent company and all major overseas subsidiaries.

In 1980, Celestion’s continued investment in technology bore fruit behind the scenes of loudspeaker design. An instrument was developed that uses laser light to scan a diaphragm and produce moving ‘microscope’ pictures on a computer screen. This system taught Celestion’s designers hitherto unknown subtleties of loudspeaker design, many of which remain trade secrets to this day. 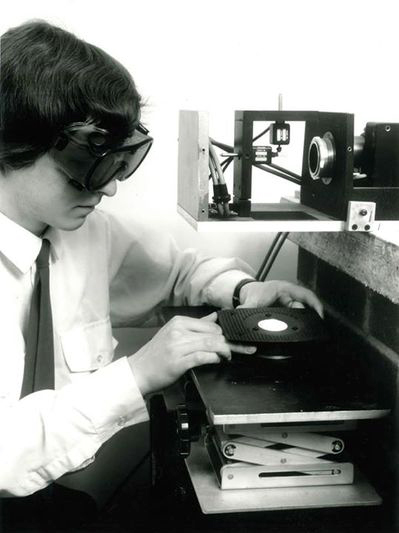 The Hadleigh Road site had been closed down in the early 1980s and resources concentrated at Foxhall Road.

In 1984 – the Sidewinder range of guitar speakers were unveiled. These were endowed with a special edgewound aluminium voice coil – a process developed to maximise the ratio of motor strength to mass which resulted in very high efficiency designs.

In 1992 Celestion International Ltd. was sold, as a separate entity from the clothing division, to Kinergetics Holdings (UK) Ltd. A holding company whose majority shareholder is Gold Peak of Hong Kong.

2003 – the Celestion and KEF manufacturing operations are united under the banner of KH Manufacturing Ltd. While Celestion International Limited continues the tradition begun by Cyril French and Eric Mackintosh over 70 years ago. The research, development, sales and marketing of loudspeakers of the highest quality.