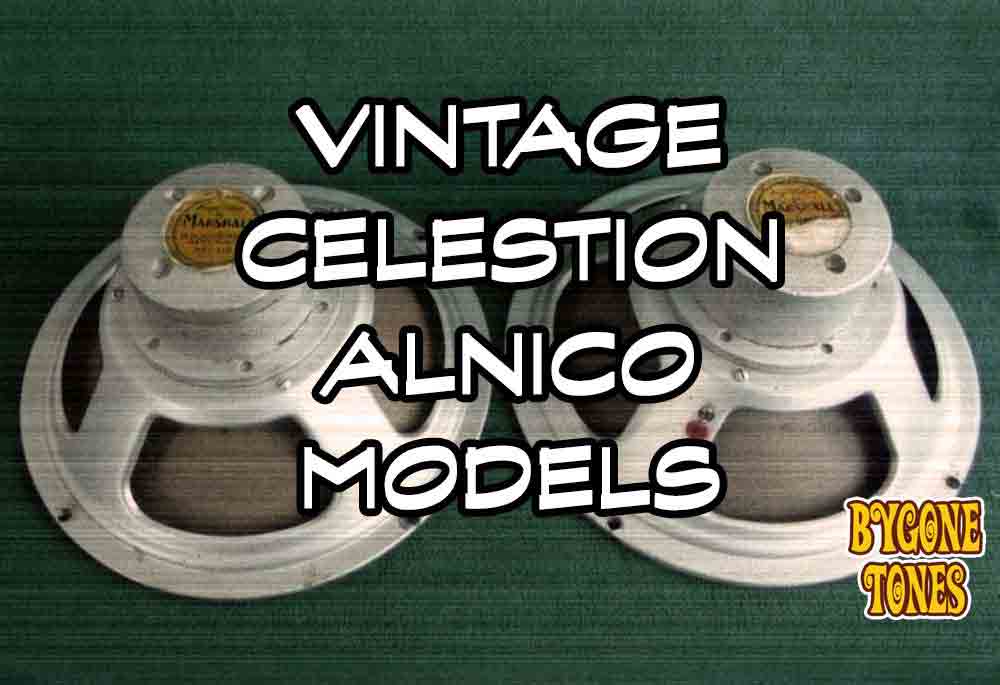 Quick links to the models mentioned on this page:

Alnico’s are easily the most collectable vintage Celestion speakers, and can be found in ‘holy grail’ amplifiers and speaker cabinets from the early to mid 60’s: Marshall, Selmer, Vox etc. So expect to pay high prices for mint examples with their original cones. Model T530 aka ‘Vox blue’ and model T652 are particularly sought after by Vox and Marshall collectors.

Generally speaking, the alnico magnet speakers are less aggressive sounding in comparison to the ceramic magnet speakers (aka ‘greenbacks’). They are very responsive speakers with detailed treble, and are famous for their clean ‘chime’ or ‘jangle’ and smoother overdriven tones. Think early 60’s guitar bands like ‘The Who’, ‘The Beatles’, and ‘The Shadows’.

The B025 & B024 probably first appeared in the late 1940’s. They are not strictly speaking guitar speakers and were originally designed for use in audio equipment. However, they were used in some 1950’s guitar amplifiers.

They were advertised as 12 watt speakers, and are known to have struggled with a cranked Vox AC15 amplifier. So they should definitely be treated with care!

Production seems to end around 1965.

The pulsonic ‘H1777’ cones appear around mid 1962, before this they normally have the RIC 1 cones.

The legendary ‘vox blue’ speakers. Highly sought after by vox collectors and tone seekers, considered by many as the ‘holy grail’ for guitar speaker tone. Famous users include Brian May (Queen), The Edge (U2), and The Beatles.

The T530 first appears around Jan 1960 with the ‘RIC’ cone. Then from around mid 1962 onwards they can be found with pulsonic cones usually stamped with a H1777 or 003 code. The pulsonic cone speakers are the most sought after.

Production stopped around 1964, at which time they were superseded by the silver alnico model T1088.

The alnico blue was re-issued sometime around 1994 and is still in production today.

Also known as the ‘Vox silver’ or ‘Vox bulldog’. These are basically the same as the T530 vox blue but with a ‘poly grey’ colouration. Introduced in 1964.

In line with most other Celestion guitar speaker models, welvic doping was added to the cone edge from around spring 1966 onwards, and the voice coil upgraded by 5 watts in late 1967.

Although not exclusive to Marshall, this speaker was standard in all of the first Marshall speaker cabinets and combos made until around late 1965. As such they are very sought after by Marshall collectors, particularly if they still have the original Marshall labels on the back.

From late 1965 Marshall started using the T1221 greenback speaker instead, although T652’s have been found sporadically into late 66.

Cosmetic differences aside, the T652/T650 is basically the same speaker as the vox blue.

The reissue T0652 is also rare and only appears in special edition Marshall releases, such as the JTM45/100 40th anniversary stack and the 50th anniversary bluesbreaker combo.

Famous users include Pete Townsend (The Who) and Eric Clapton.

In line with most other Celestion guitar speaker models, a thin band of welvic doping was added to the cone edge from around spring 1966 onwards.

Introduced around Sept 1963, these were the stock speaker in Selmer Zodiac combos until late 1965, when they seem to have been superceded by the T1134 G12H, and very soon after that the T1217 G12H.

Has the ‘hammered/oyster’ paint finish to the metal chassis & magnet, and is a smarter looking speaker than the T652 in my opinion.

The cone appears to be the same as the T652 and is stamped H1777 or 003, however from about mid 1965 the T731 came with a heavy band of welvic doping on both sides of the cone, similar to most G12H speakers of the period.

Speakers used by Selmer often have a ‘received by’ date stamp on them. These can be anywhere between a few days to several months after the Celestion manufacture date code, and this gives us some insight into the amount of shelf life they had.