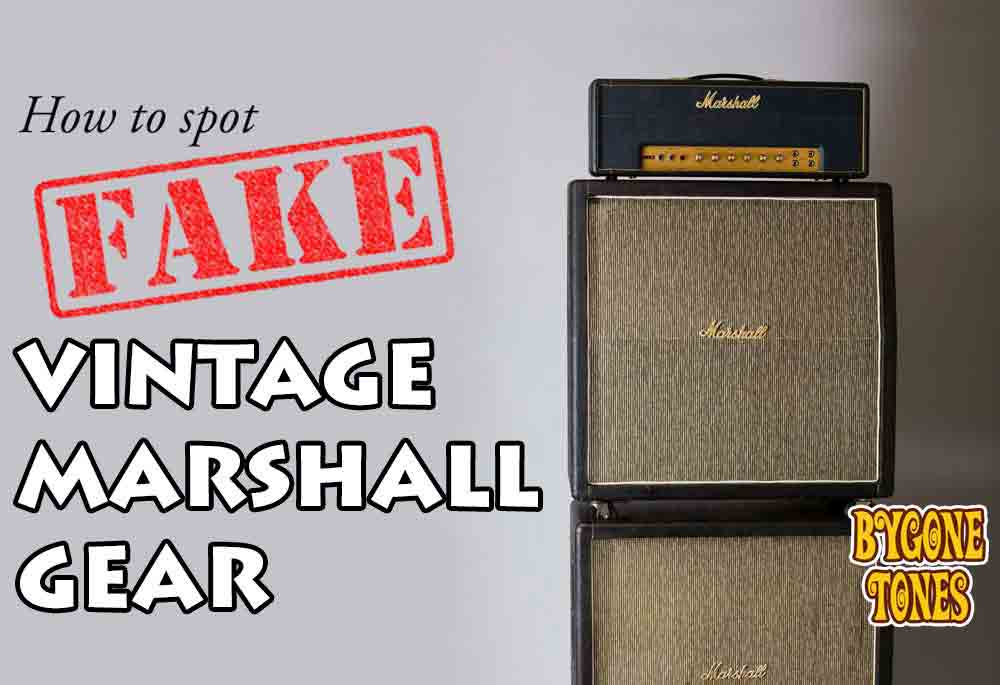 The vintage gear market can be a daunting place, with seemingly lots of dis-honest sellers out there looking to rip people off.

In this blog post I will be going over a few basic pointers for identifying fake vintage gear from the Marshall plexi era. Hopefully this will prevent a few people from getting stung.

The Hotspot For Fake Marshall Gear

The most collectable vintage Marshall gear is basically anything from day 1 (supposedly 1962) to the end of the basketweave period (mid 1971). These are the most likely items to be faked or ‘lashed-up’. Generally speaking, the older they are, the more collectable and valuable they are. 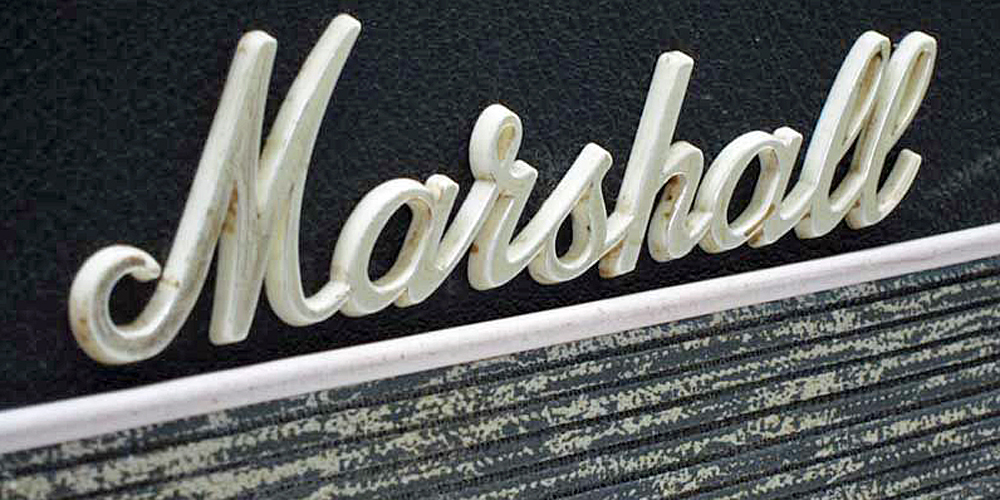 In particular, be very wary of anything from the pinstripe period; circa 1965 to early 1968. Amps such as the Marshall plexi 18w combos and bluesbreaker combos are an absolute favourite for fraud due to the high sale prices they can bring, and the high demand for them.

The best way to identify fake vintage Marshall plexi gear is to look very closely at the various parts.

Warning – the rest of this blog post is going to get very nerdy, so leave now if this is likely to bore you!

There are a couple of known reproduction pinstripe grill materials around, but they can be difficult to differentiate without seeing them very close up. This is one of the reasons why some online dealers only take blurry or distant photos of their gear!

The closest reproduction is the Eric Collins “true bluesbreaker” grill cloth . It is 99% the same as the original material but there are minor differences in the print pattern: 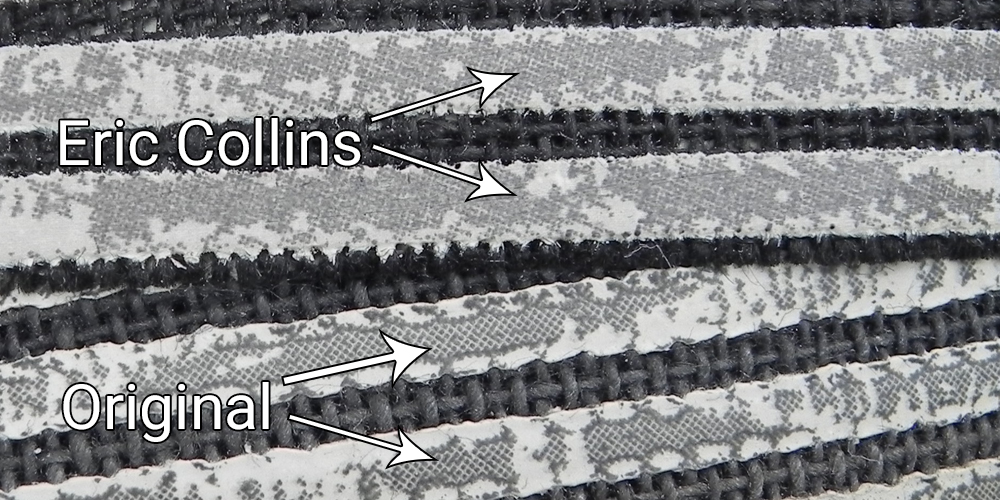 Notice the square tread pattern on the original material.

A more obvious reproduction material exists, apparently manufactured in China. It can be found on a lot of the older fakes made in the 1990’s:

I have never seen this stuff in person, but apparently it feels quite rough – almost like sandpaper. The visual difference is fairly obvious in my opinion, with no print pattern showing inside the grey sections.

You may have seen the brown pinstripe material shown in Michael Doyle’s History of Marshall book. Although the material itself is genuine and not a reproduction, it is unlikely to have ever actually been used by Marshall. Never say never of course, but all the examples I have ever seen have been fakes. 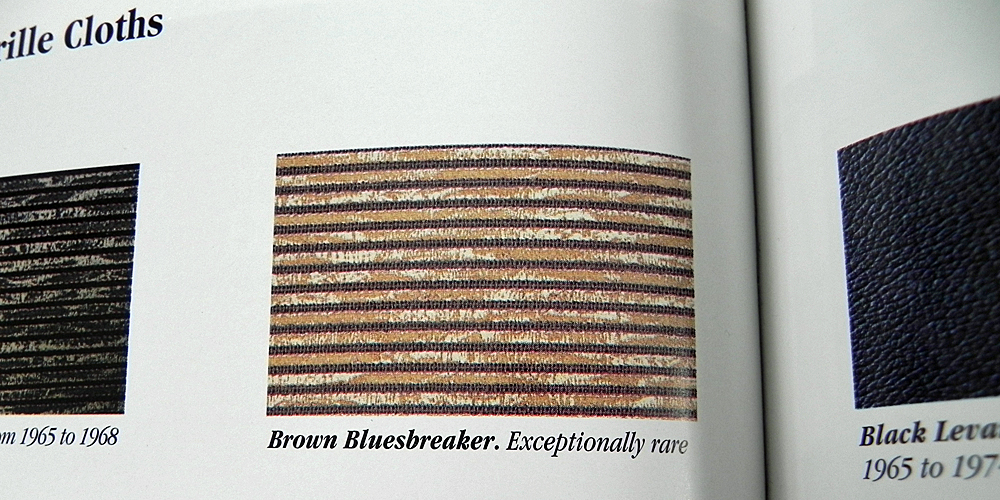 Unfortunately there are several books out there containing mis-leading reference information & photos like this. Contributions made by fraudsters posing as experts.

This was a clever strategy for selling their lash-ups during pre-internet times, when books were the main reference material available.

I should add – I’m not blaming the authors of those books at all, just some of their information sources. 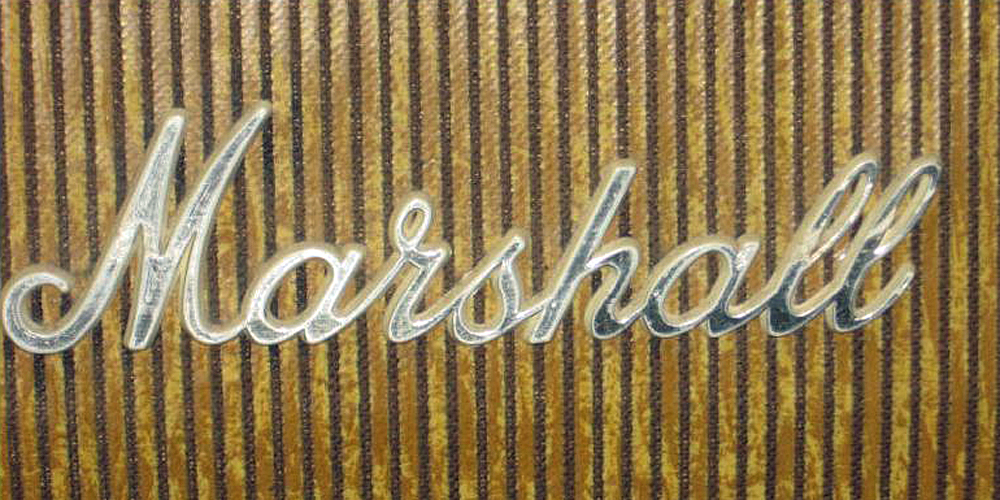 Apparently, a single full roll of brown pinstripe, still in its original brown wrapping, was purchased at an auction in Surrey. The packaging still had the Marshall factory address attached, but looked like it had been returned. It was purchased by a relatively well known (and honest) Marshall plexi dealer. He proceeded to sell it in cut lengths, with the overwhelming majority of it going to a notoriously dis-honest dealer. – Thanks to John M for this info.

From mid 1965 to late 1967 – most of the pinstripe period – Marshall were using a really nice looking tolex known as ‘green on black’ levant. You may also see it referred to as ‘blue on black’, ‘green wash’ or ‘blue wash’ – it’s appearance can vary a little.

From late 1967 onwards Marshall started using the more plain looking “black levant” instead. This is actually a very dark green and not true black. As typically found on basketweave cabs and the early 70’s metal panel amps etc.

Im sure a lot of people will dispute this, but personally I have never found black levant on any Marshall gear made between mid 1965 to mid 1967. Always the green on black. I’ve owned plenty of 4×12’s and various PA cabs of different shapes and sizes from that period. Never say never with Marshall, but if you do find any black levant it is definitely against the norm in my opinion and worthy of further investigation!

The green on black levant can be difficult to differentiate from the black levant, especially in photos. The ageing process does seem to fade the green colour on some gear, and a lot of people would actually paint the tolex black or put black boot polish on it.

The best way to identify the tolex is to look on the insides of the cabinet where it has not been exposed to the elements. Where previous owners have not bothered to paint. The tolex can appear black externally but still be the original green on black internally: 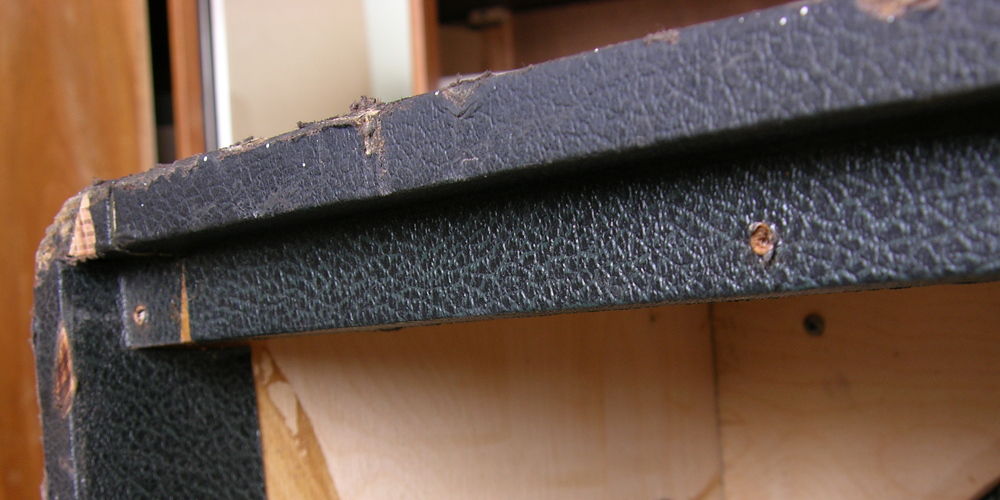 Black levant is by far the most easily available tolex of the two, and therefore the most likely to be used on any fakes. Green on black has not been available for decades. There is a similar looking ‘British Emerald bronco’ tolex available from some retailers but when you see it in person it is nothing like the old Marshall tolex, it is way too green.

Notice the Doyle book (1993 edition – page 125) states that the black levant was used from 1965 to 1974, and the green on black was only ‘used sporadically from 1966’. This has not been my experience at all. Possibly more false information given by dodgy dealers to fuel the sale of lash-ups.

Genuine logos are stiff and fragile (possibly bakelite?), they will easily break if mis-handled. The gold paint is silver underneath when it becomes tarnished.

The reproduction logos have pointed fixing pins on the back, they are a lot more flexible and just not as good quality as the originals. 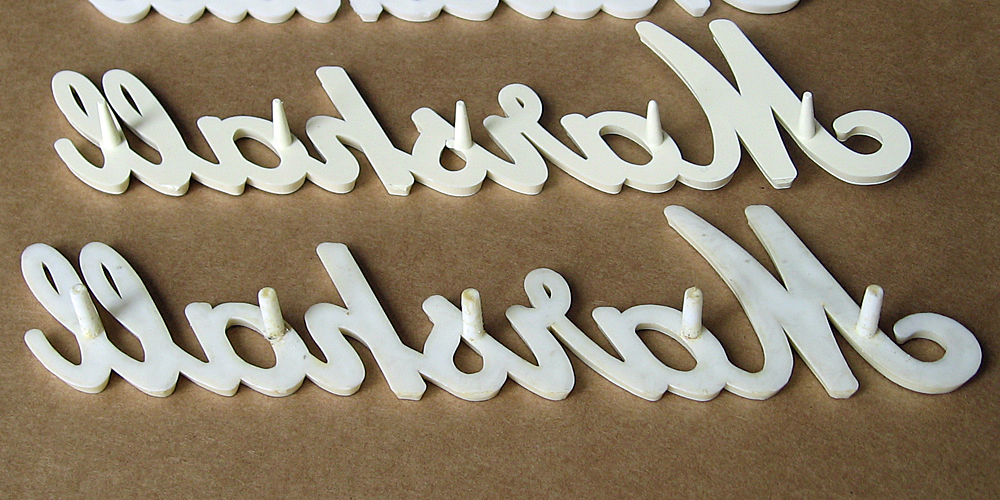 Notice the small defect on the back of the ‘s’ of the reproduction logo.

Watch out for over the top artificial ageing on the repro logos. Excessive sanding is not realistic in my opinion. Due to the fragile nature of the genuine logos they tend to break into pieces if they get abused. Expect a minor amount of age related paint wear, but not sand blasted!

Marshall used two types of metal handles: The first version used from mid 1967 to mid 1968 came with slimmer edges down the sides. These handles are very rare to find as spares and were exclusive to Marshall cabs to my knowledge.

The second version used from mid 1968 to late 1971 had wider edges at the sides. These handles are much more common to find as spares, and were used by several other brands besides Marshall. For example, Orange used them well into the late 70’s.

The transition between the two types of handles was a good few months or so into the basketweave period, around mid 1968. So it is highly unlikely you will ever see the earlier pinstripe grill cabs with the wider style handles. Do not let dealers give you the “transitional overlap” and “whatever parts were available” excuse on this one!

Also pay attention to the bolt used in the back of the handles:

Most of the fake pinstripe cabs I have seen for sale are later period cabs – basketweave period usually, with a replacement grill cloth. These can be identified very easily by the type of metal handles.

As mentioned earlier, the pinstripe grill material was phased out by early 1968. The wider style metal handles appeared a few months later. So you are very unlikely to find a genuine pinstripe cab with the wide handles:

This cab likely has a fake grill material, although the photos are too blurry to see it properly. Inside are the T1217’s with white Marshall labels as described in my fake Celestion speakers article.

All Marshall 4×12’s came with leather strap handles until around mid 1967. 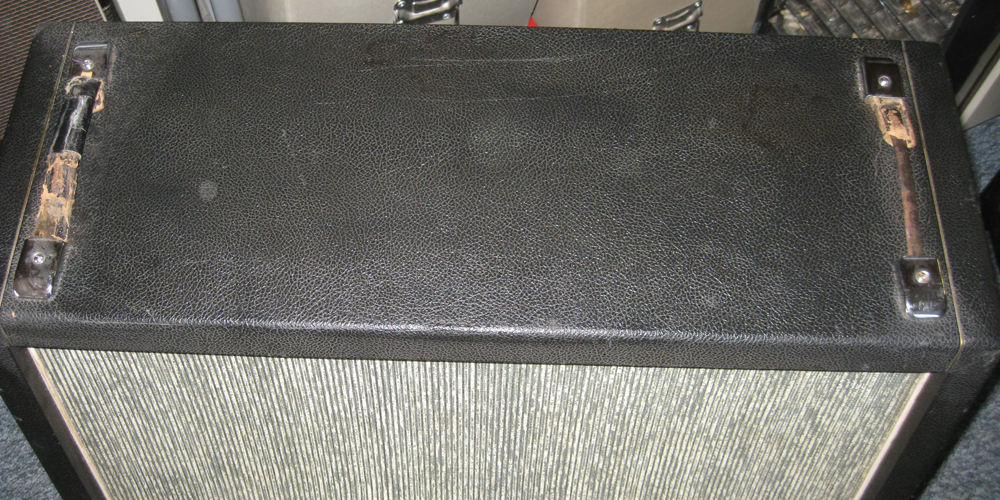 This cab was for sale on UK ebay a few years ago. The speakers are very obvious fakes, with the ’12th Feb 1967′ date stamp printed onto a post 1969 chassis.

Notice the black levant in near mint condition, and the gold piping appears to be too thin for Marshall. Also the ‘like new’ chrome handle end pieces, yet with completely shredded leather parts.

The pinstripe material is difficult to authenticate without seeing a good quality close up photo. Although lets face it, the odds of it being genuine are very slim.

As I mentioned earlier, these combos are an absolute favourite for fakery due to their high collector value, and the high demand for them. Please be very careful when buying them.

This amp was on ebay a while ago. Notice the inconsistent road wear – black levant tolex in near perfect condition for a 50yr old amp, yet apparently the grill got trashed and needed sewing up in several places. 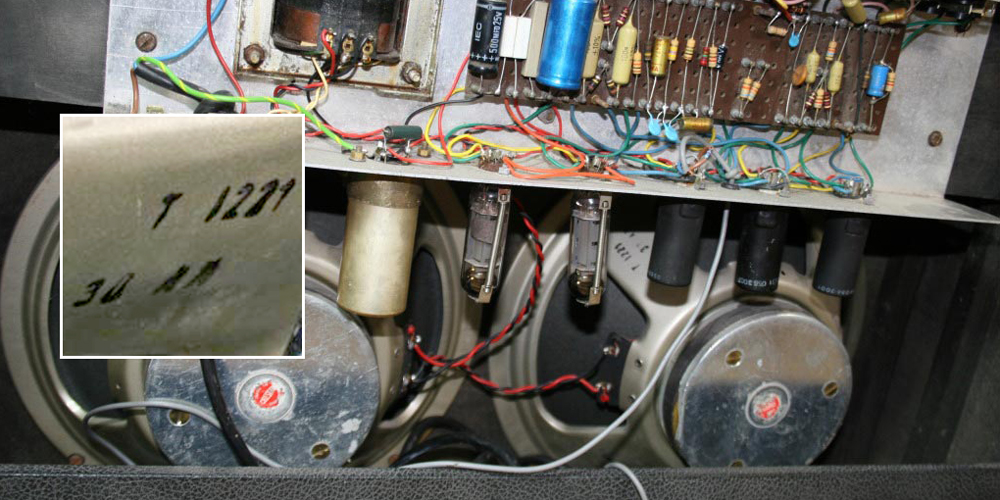 Looking inside, if you know your Celestion speakers you will recognise that these are ‘G12S’ model speakers by the size of the magnet and the little red sticker in the center. Likely model T1417. Yet they are stamped as T1221 from Jan 1967!

I suspect in this case the speakers would have had plastic G12M covers on the backs to hide the magnet size, but they have probably gone missing over the years. Common practise was to fit a white Marshall label on the back too.

The bad news is, the fakes I have outlined on this page are fairly bad ones. They stick out a mile to a Marshall nerd. Those fakes were likely made at a time when all people had for reference was the minimal, and sometimes deliberately misleading, information and photographs given in books.

Thesedays, crooks have access to the same information as everyone else, such as this article, and they’ll use it to make ever more convincing lash-ups. It is likely they are sticking to using genuine vintage parts taken from other gear, rather than using obvious repro parts and printing their own date codes on speakers.

If in doubt get an expert opinion. But more importantly…

Never buy from a dealer with a bad reputation for selling fakes. A leopard can’t change it’s spots. Without mentioning any names, the worst offenders from the glory days of the 80’s and 90’s are still very much in business. Still trading online using all the big trading websites, namely ebay and reverb.

Get Provenance (as best you can)

Used gear can change hands many times, so it is always worth digging as deep as you can to reveal its full history. Obviously if you discover it was originally bought from ‘fakes r us’ then it is best avoided!

A common tactic for boosting the value of an item is to claim it was owned by a high profile celebrity. A £500 amp can become a £100,000 amp if it was once owned by John Lennon! Demand rock solid provenance or pass on it.

Any idiot can write or type a ‘letter of authentication’ and forge a signature. Please do not be hoodwinked by such an easily made document. Even photos of the celebrity holding the instrument can be doctored very easily thesedays with photoshop.

Anyway, hopefully this blog post hasn’t put you off buying vintage Marshall plexi amps completely, but please do be very vigilant out there. Research the item, but more importantly always research the guy selling it. Stick to the reputable dealers.