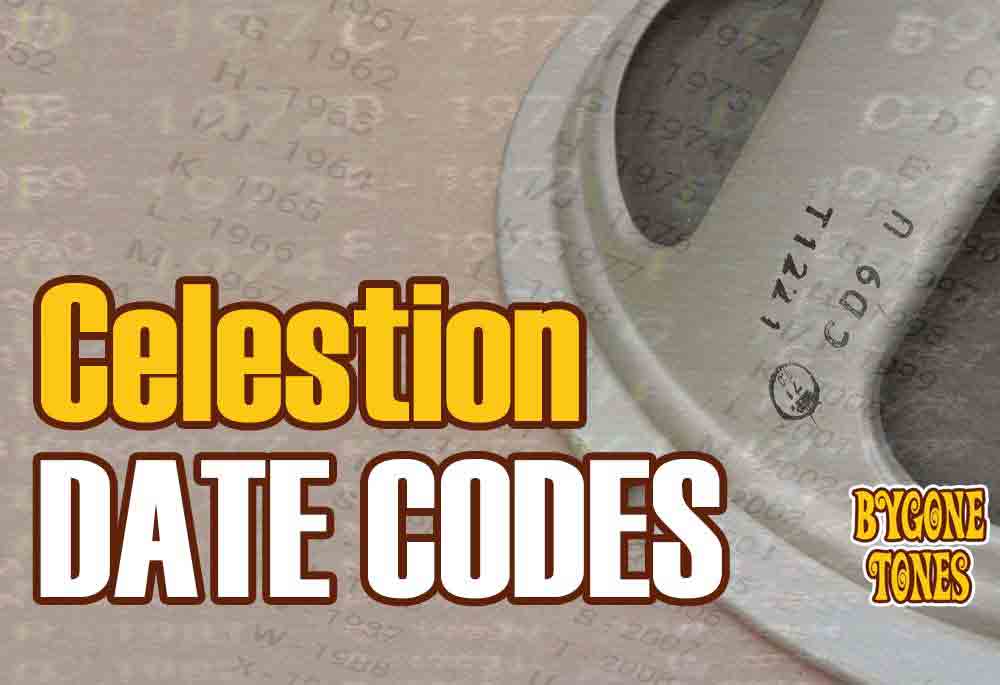 How To Date Your Speaker

All Celestion date codes contain a pair of letters. These represent the month and year of manufacture. 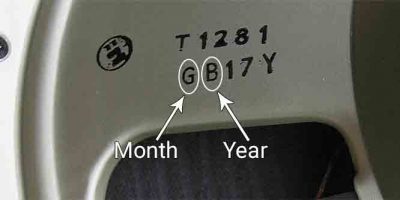 To date your speaker, simply use the reference table below to decipher them.

For 12″ speakers, the location of the date stamp can guide us to the right time period. These are colour coded on the chart below.

The date stamp location for 15″ and 18″ speakers, tends to be on the outer rim of the chassis.

Note – Ceramic guitar speakers (greenbacks) first appeared around 1964 / 1965, so it is highly unlikely you will find any earlier than this. Before 1965 guitarists were mainly using the alnico G12 models.

Celestion would generally go through an alternating cycle of stamp formats – either Day Month Year (DDMY) or Month Year Day (MYDD). These are included at the top of the chart for reference, and can be used for guidance to the right time period.

Older date code charts, such as this one, place a lot of emphasis on them. However, just be careful using this method. There are quite a few speakers out there that do not comply, and this tends to confuse people.

Creamback speakers made from late 1974 (G) to mid 1975 (H) are a particular hot spot for these. The way to spot them is by looking at the other period features of the speaker. Eg the cream coloured magnet covers tend to be from 74 or 75, rather than 1968. I have written a separate post about this – back to front celestion date codes.

2) Through mid 1968 you might find the codes printed on the outer rim of the chassis instead of on the chassis leg.

3) Some speakers, such as the sidewinder series, may have their date stamps printed on the outer edge of the ceramic magnet instead of the chassis leg. Probably because the frame leg is painted black. 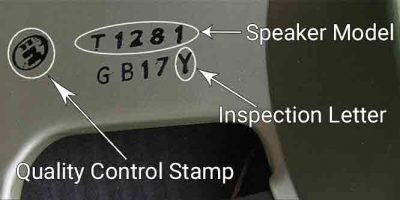 An extra single letter is apparently just an ‘inspection letter’ and can be ignored. For dating purposes it is useful to know these are only usually present on speakers made between 1969 to 1976. From 1986 onwards a two digit number is normally used instead.

The small circular stamp with ‘insp’ text or a letter ‘P’ inside it, is a quality control stamp. It is an important stamp to look for to authenticate old ‘pre-rola’ speakers.

Date codes are usually printed on the outer rim of the chassis and consist of 4 digits only.

Date codes are usually stamped on the front gasket of the speaker. Notice the large font size and white manilla paper gasket. A leading zero is used for single digit numbers.

The font size is reduced from around mid 1965 onwards.

The gasket material is made from cork with a thin paper overlay and is made up of 4 separate pieces. The date code is still on the front gasket but with a smaller font size.

Any greenback speakers with pre-April 1968 date codes printed on the chassis leg are likely to be fakes. Genuine stamps would be on the front gasket (as in the previous photo above) until April 1968.

Date codes are printed horizontally on the frame. The faint ink can sometimes make them difficult to read. Occasionally they might be printed on the outer rim.

Date codes are printed vertically on the frame. An additional inspection letter is usually included (except Aug 73 to Jun 74), these can be ignored for dating purposes.

Leading zeros are usually omitted from the day of the month, eg ‘6’ instead of ’06’.

From around June 1976 the inspection letter is no longer included.

The circular quality control stamp changes appearance through the years: From roughly March 1978 to mid 1980 – usually a large letter ‘P’ or ‘Q’. From around mid 1980 to late 1985 – usually an “insp number” stamp with no circular border.

From about mid 1983 to 1986 the T model number is rarely stamped on the frame leg because it is shown on the speaker label.

From around Jan 1986 onwards the ‘insp’ stamp is no longer used and the two digit inspection number is appended to the end of the date code instead. These inspection numbers can be ignored for dating purposes.

From around Dec 1987 to April 1990 – the date code, speaker model, and inspection number are joined together in one continuous line. The letter ‘T’ prefix is usually omitted from the speaker model.

From around April 1990, the ‘T’ prefix is usually included with the model number.

Date codes are printed on the front gasket and may include the model number and inspection number.

Date codes are printed on a magnet sticker and go back to the simple 4 digit system.