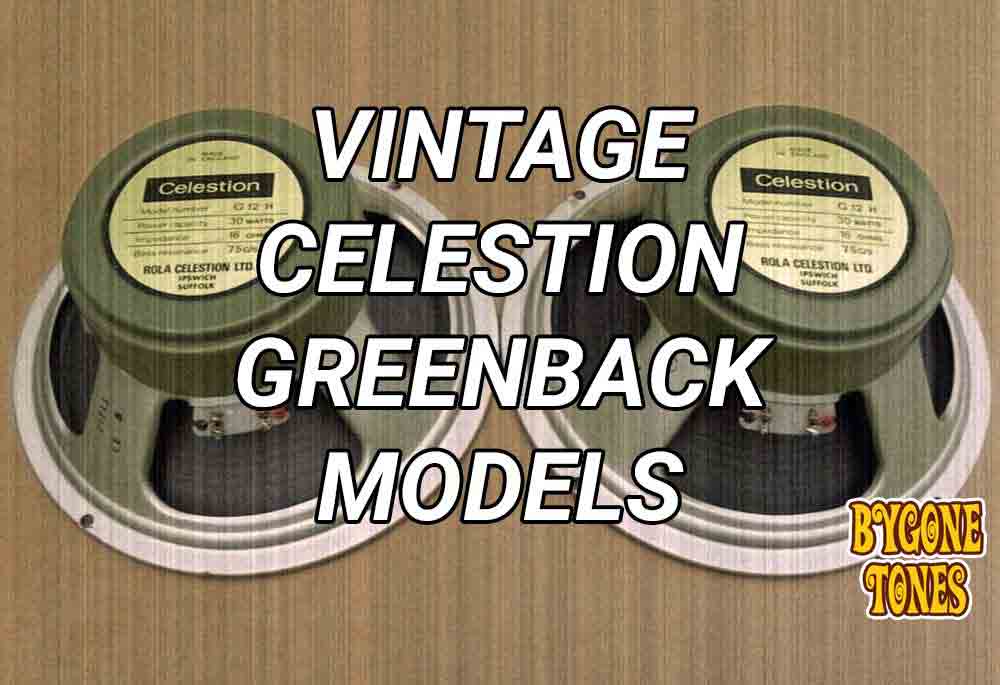 Quick links to the models mentioned on this page:

Ceramic speakers (aka ‘greenbacks’) first appear around late 1964 to early 1965. They have a slightly more aggressive tone compared to the alnico magnet speakers. Amp manufacturers switched to ceramic speakers, mainly because they were cheaper than alnicos, but they also proved to be a perfect match for the edgy, over-driven guitar sound that was emerging at the time. Think Cream era Eric Clapton and Jimi Hendrix.

The ceramic magnets used on Celestion greenback speakers came in four main sizes. The larger magnets have a higher power handling because they can absorb more heat.

Generally speaking, the bigger the magnet, the louder and bigger the sound will be. The G12H and G12M speakers are the most popular models.

*Power handling increased by 5 watts around late 1967 due to a change in the voice coil design.

Shown below are some of the most commonly found greenback models from the 1960’s & 1970’s.

Note – the speakers evolved through the years, so any small details shown such as the cone stamps, labels, and magnet covers, may be different depending on when the speaker was made.

The T1134 model was probably the first ‘G12H’ speaker Celestion ever made.

According to the Celestion log book, it was first introduced in Nov 1964 and has an impedance of 10-12 Ohms. However, all the ones I have seen have been 15 Ohm.

They were mainly used by Selmer, probably as a successor to the T731 alnico. The T1217 quickly superseded the T1134, so they may have only had a production run of about 12 months or so. As such they are quite a rare speaker model.

They usually have pulsonic cones stamped H1777 or 003 with the welvic doping on both sides of the cone. Rated 25 watt, with the hammered/oyster paint finish to the chassis.

Notice the unusual solder terminals. The lead wires come through a pair of rubber grommets below and then upto the metal solder points above, very few Celestion guitar speakers were made like this. The change in chassis design is probably the only noticable difference between T1217 and T1134. The log book entry for T1217 does confirm this: “as T1134 but with new type pressure housing”.

T1221 is Celestion’s most legendary speaker – the classic G12M speaker with the 75Hz cone. Known simply as “the greenback” ever since its reissue in the 80’s.

The T1221 was the stock speaker in Marshall lead guitar 4×12 cabinets (1960 model cabs) from the mid 1960’s up until the late 1970’s and was also used by many other brands at the time. As such it is an absolute classic speaker and can be heard on countless albums. Famously used by Angus Young and an important ingredient in Van Halen’s “brown sound”.

The date of entry into the Celestion log book is 6th May 1966 – see ‘Michael Doyle – History of Marshall’ – p137, however they were definitely made earlier than this. Marshall were using them in 4×12 cabs by late 1965, and I once owned one dated March 1965.

After a few years of non-production in the 1980’s – what were they thinking? – Celestion re-issued this speaker in the late 1980’s and they are still making them today, available as G12M Greenback.

A popular speaker with classic rock and blues guitarists. People often describe the tone as ‘woody’. This is a tighter sounding speaker than the G12H and compresses nicely when pushed hard enough, with a warm and ‘juicy’ sounding mid-range, and a little more character to the tone than the G12H.

Other variants include the T2168, which is the same as the T1221 but without the plastic magnet cover.

The T1221 went through a lot of changes through the years. The original speakers had a power handling of 20w and had no doping at all on the cones, really great sounding speakers and it is very rare to find those first ones nowadays.

Over time Celestion made small changes to the specification, probably to make the speaker more durable. This included; more doping on the cone edge, and increased power handling. As a result the speaker had more warmth and loudness, but at the cost of other desirable traits such as responsiveness and clarity, in my opinion.

Unfortunately Celestion recently ceased production of their ‘Heritage’ greenback line. Their recreation of the late 1960’s pre-rola period speakers. Look out for them on the second hand market! However, at time of writing the EVH G12M is still in production, and is apparently the same speaker with a different label on it 😉 Grab them while you still can!

T1217 is easily the most common G12H Celestion greenback model from the 70’s. It was the stock speaker with many UK brands in the 1970’s, such as Orange and Carlsbro.

Very nice sounding speakers – louder than the G12M and more ‘boomy’, but less compressed and more fluid. Strong in the upper mid range.

To my knowledge the T1217 was never a stock speaker with Marshall. Watch out for the fake T1217’s with white Marshall labels on the back!

The date of entry into the Celestion log book shows 6th May 1966, however I have owned several examples earlier than this, and I have recently seen one example dating back to Dec 1965. Originally they looked very similar to the T1134 with just the gold Rola Thames Ditton labels on the back, but with the standard solder terminals. The familiar green covers appear very soon after this around March / April 66.

The first T1217’s had a power handling of 25 watts and had welvic doping on both sides of the cone. Around late 1967, the doping on the back of the cone was phased out, roughly the same time the voice coils were upgraded by 5 watts.

I am including T1281 and T1534 together here because they are basically the same speaker. According to ‘dr.decibel’ at Celestion.com, the T1281 is the Marshall labelled version, and T1534 is the standard Celestion label version. These are the G12H model with the 55Hz cones.

The T1281 first appears around September 1966, and was an exclusive model to Marshall. They were used in the 100 logo 4×12 cabs (model 1982). It is regarded by many as “the Hendrix speaker” because he can clearly be seen using these cabs in old footage.

Loud and bassy, with the thick sounding lower mids. Also used by countless other pioneering guitarists back in the 60’s such as Jimmy Page and Ritchie Blackmore. The T1281 is probably the most sought after greenback model of them all!

The original T1281 was a 25w speaker with the white voice coil fomer and the pulsonic cone usually stamped ‘SP444’. Like most G12H of the period it also came with the welvic doping on both sides of the cone.

Quite a different sounding speaker to the more commonly seen 30w version made late 67 onwards. They are tighter sounding and less boomy. It is this 25w version that Jimi Hendrix was likely to be using in his iconic tall pinstripe Marshall stacks, most notably during his legendary Monterey performance in June 1967.

T1511 is the 55hz version of the G12M speaker. It was the stock speaker in Marshall bass cabs (model 1935) from around mid 1967 until the very late 1970’s. They were not exclusive to Marshall as I had originally thought, but are pretty rare to find in anything other than Marshall.

Notice the wide band of doping on the front edge of the cone compared with the T1221.

Note – Pre-rola speakers always have 75hz printed on the labels, and this applies to all 55hz speaker models, not just the T1511. Always look for the white ‘102 014’ stamp on the cone and this verifies that it is the 55Hz cone. Only the later ‘Rola Ipswich’ labels have 55hz printed on them.

T1511 was designed for bass but is a popular speaker with guitar players due to the different tonal characteristics compared with the T1221. It has less mid-range, and more of a scooped tone.

This is another classic Celestion greenback model crying out to be reissued.

The G12S range are very mis-understood and under-valued speakers in my opinion. They are excellent speakers.

The T1417 is basically the same speaker as the T1221 G12M apart from the 7oz smaller magnet. It has a little less bass, and a little less volume, with a slightly warmer mid range. Ideal for playing at home or smaller venues.

‘Pre-rola’ period speakers can be identified by the small red sticker in the center of the magnet (see first photo).

T1517 is a similar speaker often found in Selmer gear and usually has a G12M sized plastic magnet cover.

Early examples (circa 71 to 73) with the pulsonic cones tend to have the four ridge spider support, and a solid dust cap.

Later speakers usually have the 6 ridge spider support, and a slightly different dustcap with a small black circular mesh in the center.

The four ridge spider is made from a softer material than the 6 ridge spider. It allows for more cone movement and this results in a louder speaker, with a looser feel.

Quite a rare speaker model. G12M magnet with the low resonance 444 cone and silver cap. 50Hz bass resonance on the label.

Quite a scarce G12H model with 55Hz cone and four ridge spider. Usually found in Marshall ‘Artiste’ combo amplifiers from the early 70’s. By the late 70’s they found their way into certain 4×12, and 2×12 Marshall cabs, usually Artiste or bass cabs.

These have a different cone stamp to most other Celestion greenback models. Expect a ‘102/30’ stamp or just a single ‘5’ on pulsonic cone speakers, and ‘5011’ or ‘1105’ on blackback period speakers.

The T1871 is an 8 Ohm G12M speaker with 55Hz cone, similar to a T1511, but has the softer four ridge spider. Resulting in a more ‘open’ tone and a little more volume. Very nice sounding speakers.

Apparently made as early as 1971, but definitely much more common during blackback era (late 70’s). Probably a speaker designed for Vox, as they seem to turn up in late 70’s AC30’s quite a lot.

T1440 are probably my favourite Celestion greenback model, partly due to their rarity, but mainly because they just sound so awesome! These are a G12S model with 55Hz cone, and have just a thin band of doping at the cone edge.

They are punchy sounding speakers, with tight bass and clear highs, without the warmth and strong mids of the T1417. Try a pair of these with a 20w or 18w amp and crank that sucker!

‘Pre-rola’ period speakers usually come with a G12M magnet cover and the label ammended with a little red ‘S’ sticker. Another example of Celestion being short of labels during the 60’s.

A similar model is the T1449 which is basically the same speaker as far as I can tell. The Celestion log book entry for T1449 mentions a change in the doping, but having owned both models I could not see or hear a difference between them.

An 8 ohm G12H model with silver dust cap and 75Hz cone. Often found in front loading ‘Maine’ cabinets and combos. Most commonly found as blackbacks from the late 70’s, and as such the cone is typically the ‘1777’ stamped Kurt Mueller.

T2114 is a similar speaker with an M sized magnet.