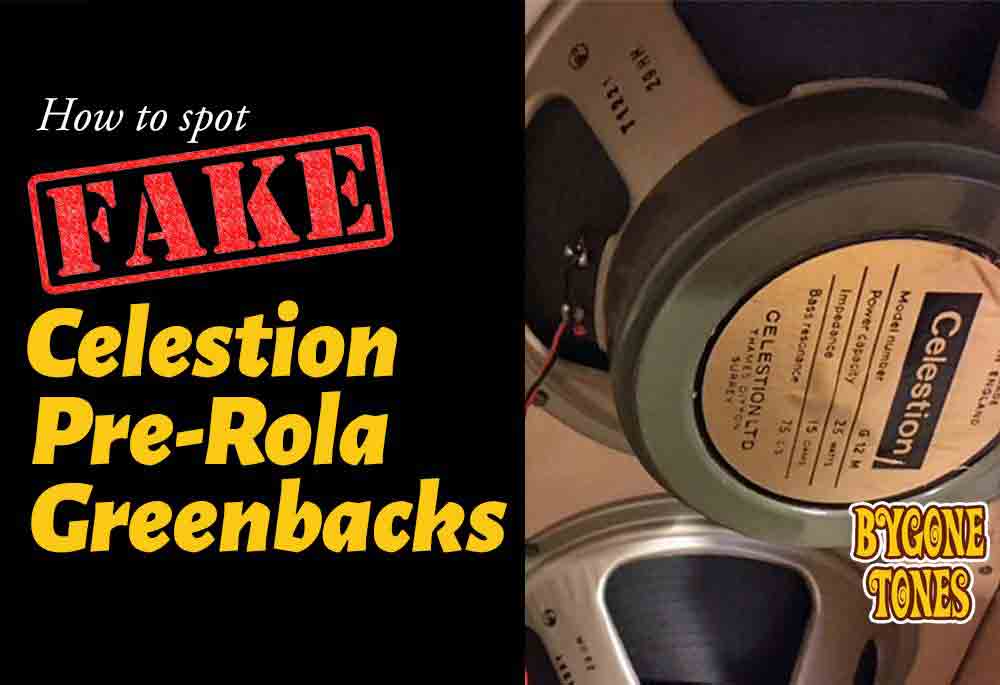 Unfortunately there is a lot of fake and ‘lashed-up’ vintage gear floating around on the used market. Most of which can be traced back to one notorious dealer in UK.

In this blog post I will be going over a few basic pointers for identifying dodgy pre-rola period speakers. Hopefully this will prevent a few people from getting stung.

You are unlikely to see fake pre-rolas for sale on their own. It is far more lucrative for dealers to make or ‘lash-up’ an entire vintage Marshall speaker cabinet or combo amplifier. The speakers are just a small part of that, and would be doctored to suit the gear being faked.

For example, a non-valuable speaker model – lets say a T1614 from 1972, might be turned into a much more sought after T1221 from 1966, then fitted into a fake 1966 Marshall bluesbreaker amp. A ‘holy grail’ amp for Marshall collectors, and very valuable.

Spotting fake speakers inside vintage Marshall gear is an important warning sign to avoid buying that particular amp or speaker cabinet, and tells us quite a lot about the seller too. They are either clueless about the gear they are selling, or dis-honest. In my experience most dealers will plead ignorant when you query this stuff. Either way, its a good idea to blacklist the seller and take your business elsewhere!

The main hotspot for fake Marshall gear is the pinstripe period: mid 1965 to early 1968, and therefore this is the period of Celestion speakers we need to be most vigilant about.

The rest of this blog post will focus on the small details we can use to identify fake speakers. Fairly tedious and nerdy sorry. Leave now if this freaks you out, but it is the only way I can do it.

A dodgy looking ink stamp is often the biggest clue that a speaker has been modified.

All genuine ‘greenback’ style speakers made before April 1968 had their date codes printed on the front gasket of the speaker.

Fake date codes supposedly from this same period will often be printed on the chassis leg instead:

From April 1968 onwards, genunine ink stamps were printed on the chassis leg instead of the front gasket. Look out for the following incorrect details on speakers supposedly from 68:

Those with a good eye might also notice the font used for the fake stamp is a bit slimmer and taller looking than the genuine one.

Some fake date codes include the inspection letter way too early, such as with a 1967 or 1968 date code. Somebody recently showed me a 1968 date code with the model code ‘T1281 Z’ next to it. Pretty wierd looking, and I would love to add the photo here but the owner would not give me his consent to use it.

Celestion used two main types of chassis; the ‘one tab’ and the ‘four tab’.

The earliest I have seen the four tab chassis is May 69 (EB date code) on the Vox silver alnico. On greenback speakers I have not seen it any earlier than July 69 (GB date code). It has a ‘tab’ on all four sides, and a small cutout at the sides of the solder terminal:

The earlier one tab chassis does not have the extra tabs or the solder terminal cutouts:

Fake speakers will often have a pre 69 date code on a post 69 chassis!

The T1217 was not a stock speaker used by Marshall to the best of my knowledge. Certainly not in 4×12 cabs anyway. Watch out for the T1217 model speaker with a white Marshall label on the back.

The fake white labels are fairly difficult to differentiate from the genuine ones, but usually the fake ones show very little signs of ageing. The genuine ones can sometimes go a bit yellow and transparent over the years.

If you’ve got a good eye for detail you might spot some of these finer inacurracies on the fake Celestion labels. In particular, notice the impedance.

Fake labels will often have the wrong impedance on them:

The heritage series labels are easy to identify by their glossy finish. There are also some very obvious repro labels around with a wierd looking sloping font. Notice both of these label types also have the “incorrect” 15 Ohm impedance:

Watch out for any peculiar looking cone stamps. Often accompanied by a white smudge – probably an attempt at removing the original cone stamp.

So, hopefully you have picked up a few pointers here. The main thing to look at is the date stamp and the type of chassis – they really stick out like a sore thumb once you know what to look for.

When buying vintage Celestion speakers, and especially vintage Marshall gear, always make sure you do your homework on the item, but more importantly – always research the guy selling it! Stick to the honest dealers, not the ones who have done jail time!